Thanks to technological advancement, the hoverboard is now easily available.  This was not the case a decade ago when it was a preserve of wealthy individuals and celebrities. Several brands, such as the Hendo hoverboard, make it easier for one to go to the gym or office. This article is a review of the best brands in the market to determine which is best and worth your time and money.

Quick Navigation
What Is The Hendo Hoverboard?
How It Compares
Conclusion

What Is The Hendo Hoverboard?

This is a hoverboard that is known for its state-of-the-art technology. Unlike other boards in the market, the Hendo hoverboard hovers on the ground. This means it does not touch the ground as it levitates.

The Hendo works by generating lift because of its four hover engines. Once liftis generated, it levitates off the ground. For this to be possible, it uses a scientific principle known as electromagnetic repulsion.  Though the term may sound complicated and confusing, this is a simple scientific concept as the four engines create a magnetic field opposite to that produced by the surface below. This creates an expulsion effect that results in the board hovering.

The Hendo Hoverboard uses the same principle that high-speed trains in China and Japan use. The only difference is that in this case there is no rail track to follow. It will work better if there is a copper-plated surface below it to create a repulsion effect. It is essential to understand that lift can only be created if the magnetic field is strong enough to lift the rider. In a Hendo Hoverboard, the primary magnetic field is repulsed by an inductive copper surface.

You might wonder why the board stays steady. The answer to this question is the electromagnetic effect created by the four engines. The four engines–two on each side of the Hoverboard–create a balancing effect, and that is why the rider does not fall when using it. The Hoverboard can only work on copper-induced surfaces and aluminum surfaces.

Hendo boasts of been the first technology company to revolutionize Hoverboards. It boasts of refreshed and redesigned features that are revolutionary. The Hendo Hoverboard boast of an operational time of not less than 10 minutes once it is fully charged. The Hoverboard is around a half-inch high, and this makes it ideal to use due to safety reasons. It boasts of a sculpted design that is sleek and produces a beautiful illuminating light when used.

Despite the level of technology used in its design, it is simple to use as all natural movements made are integrated into the system. This gives one the power to perform complicated maneuvers such as turns and twists.

It would be an injustice if we did not mention the safety features of this device. The main feature is an automatic shutdown mechanism that ensures the Hoverboard cannot be used without a rider. Newer models such as the Hendo 2.0 boast extended battery life and the ability to connect via a USB. The 2.0 also boast of a unique safety feature that allows one to turn it off with a wireless remote.

Though most of Hendo Hoverboards are still at the prototype stage, one should expect to get it for around $10,000. As Hendo improves their technology, expect to get it at a lower price in the future. 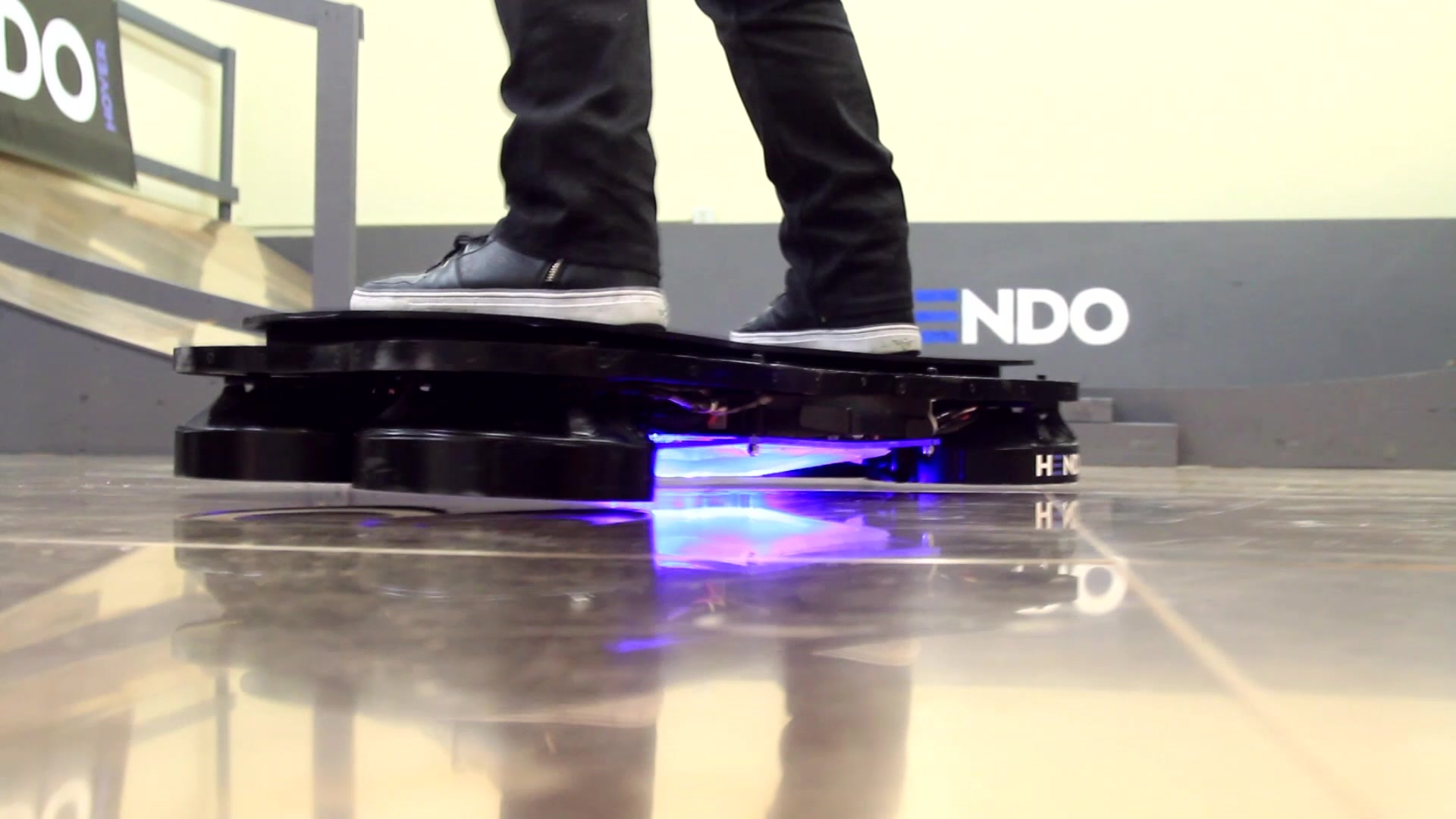 Expect to pay around $$$ for this prototype.

Using the Hoverboard is easy due to several special features. One is the sculpted design that enables the user to stand on it comfortably and a 1-inch optimal height for safety and stability. The Hendo Hoverboard gives you full control as it integrates your natural movements into its system. For this, we gave it a 4.5-star rating.

The Hendo Hoverboard has a run time of around 10-15 minutes. This is pretty good for the current technology, and we gave it a 4-star rating.

It boasts a sculpted design that is simple, elegant and powerful. On top of the board are two pads for the user to step on and this gives the user the much-needed stability to balance. Underneath the board are four hover engines that produce electromagnetic fields so that the hover can achieve its lift. The design incorporates a safety feature and cell batteries. For this, we gave it a 4.5-star rating.

The prototype does not come with a warranty. For this, we gave it a 3-star rating. 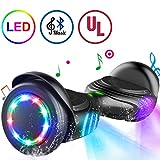 Unlike the Hendo Hoverboard, the Tomoloo is a self-balancing scooter that uses wheels rather than hovering to move from one place to another. One unique feature of this hoverboard is that a remote can control it via Bluetooth. It also has a Tomoloo app that helps the user to control the device better. The app enables the user to control the steering sensitivity and reduce or increase the speed.

Some selling features of this product are that it is easy to master and has powerful motors that give it a top speed of around 10.5 km/h. It also has customizable LED night lights that will definitely impress during the night. It has  6.4-inch hoverboard wheels for safety and a stable riding experience. It is safe, as it is UL 2272 Certified. It can cover a distance of 19 km after charging for 2 hours. It is important to note that it can only accommodate a maximum weight capacity of 264lb. It also has built-in 5W speakers.

This product can be bought for around $.

One feature that makes it easy to use is the Tomoloo app. The app enables the user to adjust not only the steering sensitivity but also the special effects displayed by hoverboard. Through the app one can also adjust the speed. The hoverboard can also be controlled via Bluetooth, and this makes it easy to use. For this, we gave it a 4.5-star rating.

This Hoverboard uses a 300W motor to operate. This enables it to travel at a maximum speed of 13km/h. After charging for 2 hours, it will have a maximum range of 19 kilometers. The only rule to this is that the vehicle should not have a maximum weight of over 265 lb. For this, we gave it a 4.5-star rating.

It boasts of a patented design that is sleek and appealing. It produces an RGB lighting color effect that makes it stand out from the rest. For easy maneuverability, it uses 6.5-inch rubber wheels. For this, we gave it a 4-star rating. 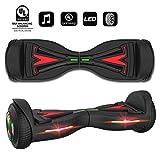 The VEEKO boasts of being a budget-friendly Hoverboard. It is also the best for beginners due to its ease of use. If you are a lightweight person, then this is best for you. One feature that makes the VEEKO stand out is the 360-degree maneuverability. It gives the rider a smooth ride due to its design that uses a 6.5-inch aluminum alloy wheel.

It can travel at top speeds of 9.6km/h and has an extended battery life after charging for around 2 hours. It is a safe hoverboard, as it is UL 2272 certified. Other factors that make it safe to use include a servo-control system that works in harmony with an acceleration sensor to ensure the rider does not fall off.

Expect to pay around $ to get this product.

It is easy to use as its acceleration sensor and the servo-control system work together to ensure that the rider is stable. With the VEEKO, one is assured of a long battery life that can enable them to travel for over 10 Kilometers. The rider must, however, ensure that he is not more than 225lbs so that the VEEKO operates optimally. For this, we gave it a 3.5-star rating.

For the VEEKO to be fully charged, the user will have to wait for around 2 hours. As long as the user is of optimal weight, then it will have a top speed of around 9.6 km/h. At this speed, it will have a distance range of around 13 kilometers. For this, we gave a 4-star rating.

It is designed to accommodate a maximum weight capacity of 225lbs. The VEEKO uses rubber tires with aluminum alloy wheels. It uses an ABS construction for durability and has a 10 minute shut feature for longer battery life. For this, we gave it a 4-star rating.

It has a 1-year limited warranty. For this, we gave it a 4-star rating.

The Hovetrax 2.0 is known for its smooth performance and maneuverability. It is known for its superior EverBalance technology that makes this hoverboard suitable for fancy riding. This is because auto-leveling is guaranteed. One feature worth mentioning about is that it has a training mode that makes it easy to use.

This product boasts of a top speed of around 13km/h subject to several external factors such as the weight of the rider, terrain and the elevation of the path it is on. For it to work best, one will need to have a maximum weight of no more than 220 lbs. Unlike other hoverboards, this has a charging time of around 60 minutes.

This product can be bought for around $$.

Several features make this device easy to use. One of them is the superior EverBalance technology that ensures the rider is balanced while using it. It is easy to mount thanks to an auto-leveling board and has a training mode for beginners. The training mode acts as a user guide for the user. One only needs to charge it for two hours. For this, we gave it a 4-star rating.

With an optimal weight of not more than 220lbs, it can travel at a speed of more than 13km/h. This will enable it to cover a distance of around 13 kilometers. To ensure this is achieved, it will have to be charged for not less than two hours and external factors have to be optimal. For this, we gave it a 4.5-star rating.

Its design incorporates a superior Everbalance technology for stability and safety.  For efficiency, it uses 6.5 inches of rubber tires and Cool Blue Led lights to impress, especially at night. For this, we gave it a 4-star rating.

Based on our review, the Hendo Hoverboard carries the day. This is because of its superior technology and design. Instead of wheels, it uses hover engines that give it its lift. It is tremendously expensive and still in prototype form, but if you're looking for a truehoverboard, this is the only one available right now. For this, we gave it an overall rating of 4.5.

Hoverboard Accessories | Recommended The Best For You