For someone looking for a fun and environmentally friendly way to get around, a hoverboard might be a good option. Learning to ride a hoverboard is not all that difficult, and with proper safety precautions, it is a safe activity for most kids. One of the most interesting developments in the industry took place in 2015 when Lexus announced they had designed a hoverboard which levitates. Lexus calls it the SLIDE hoverboard. In this article, we will review the Lexus SLIDE and explain some of the technology that makes it work. Also, we will compare it to some other popular hoverboards on the market to see how it stacks up.

What Is The Lexus Hoverboard?

Lexus has not announced plans to sell the Lexus hoverboard to the public yet, and since this board needs a specialized track to function and the incredibly advanced technology that is involved, it may be a long time before Lexus actually starts selling them to the public.

The track used in the promo video contained three large magnets that, combined with the superconductors of the Lexus hoverboard, create mirroring magnetic forces that repel each other thereby creating the hovering effect. In order to accomplish this, the Lexus hoverboard needs to be filled with liquid nitrogen every 10 minutes, and will not work if not used on a magnetic surface.

Another interesting feature of the Lexus hoverboard is the “Flux Pinning” technology that allows the board to hover at a fixed height and remain relatively stable. Once the blocks of metal alloy are cooled to the required temperature and become superconductors, they effectively “trap” lines from the magnetic fields in the track which ensures that the board remains stable in relation to the track. This Flux Pinning technology ensures the board won't be pushed too far vertically or horizontally by these opposing magnetic forces.

With all this being said, it is probably some time before this technology is ready to be sold to the public. First, the board needs to be filled with liquid nitrogen every ten minutes, and the board is rather heavy with a total overall weight of over 20 lbs. Also, a specially designed magnetic surface is needed to operate this board.

Lexus has not announced plans to release the SLIDE for sale to the public, but estimates have this prototype costing around $$$, making it quite expensive and out of the reach of most people in the market for a hoverboard. 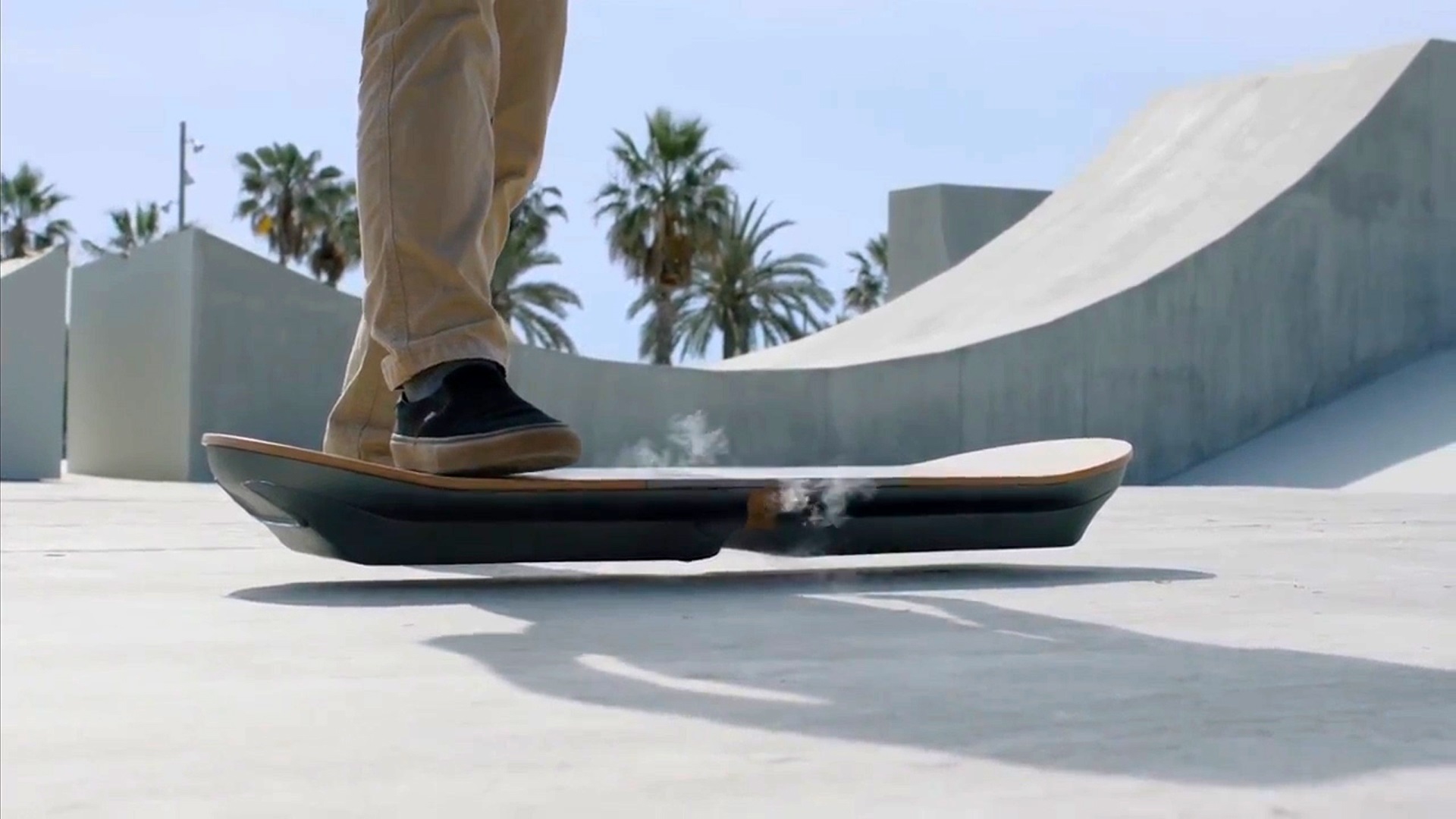 The Lexus hoverboard is estimated to cost around $$$, making it extremely expensive.

While the SLIDE seems easy enough to ride, the fact that it needs a specialized track and a refill of liquid nitrogen every ten minutes makes it not very practical.

Here is where Lexus gets its highest marks. The technology and engineering that have gone into this product is truly amazing.

Since this is a prototype, no warranty information is available. 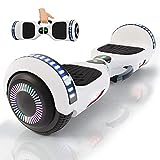 The EverCross Phantom Hoverboard is a two wheel hoverboard manufactured by EverCross. The Phantom features a very stylish design and is very easy to use. The EverCross Phantom is designed so that it only takes a brand new rider about 10 minutes to learn how to operate the Phantom safely. The Phantom is also a UL certified balance board and uses a UL certified Samsung battery. UL certification is important to ensure that these devices comply with all safety standards and regulations.

The Phantom hoverboard is an all-terrain board and features 10″ rugged all-terrain tires and has a maximum weight capacity of 265 lbs. With the battery fully charged the Phantom has a range of 10.5 miles and can reach a top speed of 7.5 MPH. Also, EverCross has included a built-in Bluetooth wireless speaker with the Phantom so you can listen to your favorite music as you take a ride. Overall, this is a very impressive hoverboard that is a very good choice for someone that is in the market for an all-terrain hoverboard.

The EverCross Phantom is priced at around $$, making it slightly pricey when compared to similar products on the market.

The Phantom is very easy to use and is designed to shorten the learning time for new users.

The Phantom is a very well designed hoverboard that features rugged all-terrain tires, a high weight capacity, and a very good range of over 10 miles.

EverCross offers a one-year warranty on this product which is on par with industry standards. 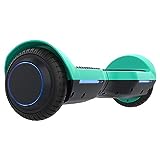 The weight capacity is on the low side at 220 lbs, but the overall range on the Hoverfly is 12 miles with a fully charged battery, and only takes 1.5 hours to charge. The Hoverfly has a powerful motor that can reach speeds of up to 7.4 MPH and features an alarm that notifies the rider of a low battery. Overall, The GOTRAX Hoverfly is a very affordable option for someone looking to purchase a hoverboard for a gift or for themselves.

The Hoverfly is available for right around $, making it a very good bargain and one of the most affordable on the market.

The Hoverfly is very easy to use with its training mode feature that allows new users to learn how to operate the hoverboard quickly and safely.

The Hoverfly is a well designed unit which features a long range and powerful motor. A low weight capacity and lack of a blue tooth speaker are the only drawbacks in the design.

GOTRAX offers a limited 90-day warranty on this product that can be extended to one year for an additional charge. 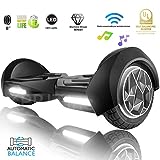 The AlienBoard Smart Balance Board is a UL 2272 certified balance board manufactured by AlienBoard that is designed for off-road use. This hoverboard features 8.5 inch tires and non-slip foot pads for enhanced safety. This hoverboard is easy to use, and only takes beginners minimal time to get the hang of balancing and controlling the board with their feet. The AlienBoard has a range of 12 miles with a fully charged battery and can reach a top speed of 7.5 MPH. Also, the AlienBoard has a high weight capacity of 264 lbs, which is in line with industry best ratings in that category.

This board can take up to three hours to fully charge the battery which is a bit longer than most hoverboards on the market. The AlienBoard features a built-in blue tooth speaker that you can pair with a blue tooth enabled device such as a smartphone to play your favorite music as you enjoy a ride. The overall weight of this unit is 30 lbs, and it comes with a handy carrying bag to make transporting this unit easier. Overall, this is a very nicely constructed board at a good price.

The AlienBoard Hoverboard is priced at right around $$, making it reasonably priced for an off-road board with a blue tooth speaker built in.

The AlienBoard hoover board is very easy to use and should only take a beginner a relatively short time to get the hang of controlling the board.

The AlienBoard is a high-quality hoverboard. It is UL certified meaning it is built to high safety standards. Also, the premium tires, rugged design, and high weight capacity are added features that make this board standout.

The AlienBoard comes with a one-year manufacturers warranty against defects.

However, one of the most fascinating developments in the world of hoverboarding took place in 2015 when Lexus announced it developed a prototype hoverboard called the “SLIDE”. The Lexus hoverboard is extremely unique because it actually hovers. This futuristic product uses advanced technology such as superconductors cooled by liquid nitrogen to create this hovering effect. However, the board must be used on a specialized magnetic track and must be refilled with liquid nitrogen every 10 minutes.

Lexus has not announced plans to begin offering these boards for sale to the public, which has led to some speculation that this was a publicity stunt on the part of Lexus. However, Lexus has the resources available to scale this technology to the point where it can be manufactured on a larger scale and be sold to the public. Also, the issue of price is an unanswered question for Lexus. Estimates put the cost of the Lexus hoverboard at right around $10,000 making it out of reach for most people even if it was available to the public.

Otherwise, the Lexus hoverboard is an outstanding concept and the videos are really interesting and fun to watch. In the meantime, we can have fun with one of the other boards that are available.